*This might be helpful to understand the character ‘I’s’ journey and his confusion of the identity.

I’m going to the America. The airplane took off with the flight announcement. The stewardess asked me what to drink. I answered ‘cola’ three times, I drank ‘sprite’. Dad told me the Americans call it coke, c-o-k-e, not cola.

Drizzling and cloudy.
Instead of fluttering to the new world,
I feel afraid because of its strangeness.

The way back to motel, I looked up the sky.
It was high and wide, dad said America has
bigger sky because they have a bigger land.

We met the chubby man. Dad told me he is my aunt.
I’ve never met him before. He told me I have to work hard because the America is the land of the opportunities. Dad gave him the money and told me we will have a green card soon.

Over the Mr. Kim’s shoulder, I saw the smoking building in the television. It seemed something is happening.
Mr. Kim asked me “When can you start?”
I said “now”
Four dollars per hour, 12 hours work everyday… something is wrong…
(it was lower than the minimum wage I recognized few months later)

I heard America started the war against Iraq.
It wasn’t important to me because I was also started my own war against to the feeling of the isolation as a stranger.

Dad said the aunt cheated us and our green card request got rejected.
The aunt already ran away to Seoul. Mom got really mad and blaming dad from the living room. I’d better go out, it’s painful to hear it… 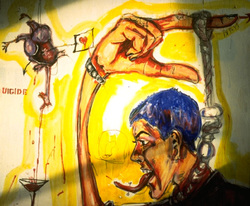 The green bottles abandoned on the table.
It is an abandoned piece of my memory.
Full of longing in my glass.
I picked up two cigarettes.
One for me,
One for people who remember me and whom I remember.
Even breathing is painful now. Who will I rely on?
I’ll probably try to comfort myself...
Throwing a few words to people with white and black face, how ridiculous...


Self – satisfaction? Useless thoughts…? I'm still lying to myself.
Even small breathes are excruciating to me...
So what binds me like this?
I'd rather be free by cutting the crimson pulse circulating my body.
A word and a word again, I’d even cut myself to be comforted.
I can't see, I can't hear.
Barren tears burn me in my heart.
Twelve hours work everyday, the life of $2000.
And today,
My 27th birthday...
Happy birthday to me,
happy birthday America.

“Go back to your country, nigga!”
This was what saw on my car after working at the night shift. The back mirror was broken and someone spitted on it. The way back home, I heard one Korean man killed many students in Virginia. I couldn’t understand what the radio said as my English was poor. But, I could feel something. I felt sad and afraid… I wasn’t able to listen the radio anymore because I kept thinking, “Go back to my country…?”
Yes, I will go back.

The KATUSA [Korean Augmentation To the United States Army] CODE OF CONDUCT
“We practice the following for the Reunification of the Fatherland, and the power and dignity to defend democracy and freedom and defending the homeland as a
member of the U.S. 8th Army who served in the Republic of Korea Army”

I left America to go back to my home, ironically, the government sent me to the U.S Army. They said we are the military ambassadors, ambassador? For what?

“Hey, do you think the South Korean can fight to the North Korean Army without us?”
My roommate PFC Mundy asked me.
I couldn’t answer. Maybe I didn’t want to answer.

Everything seems familiar as I’m from here. I met the people I always missed and spent time with them.
Everything was so excited. Seoul looks like an amusement park for me. But, I can’t escape from my feeling of isolation. I still feel the emptiness. I don’t feel home from here. My home isn’t my home anymore. I don’t know why… It’s so confusing.

I got out of the Army.
I thought I feel home as I have more freedom. I met more people and tried to get into the real society I came from.
But, it seems not working…

I came back to America. Nothing was changed.
I looked my parent’s faces for a while. Something touched my heart.
I don’t remember what that was exactly, somewhat sad, but warm.
I feel like I’m home. But, I still feel the emptiness…